We are lucky to have excellent sources from which to learn about our church history and to live in an area which values such history and tradition. Our church is one of the oldest in Vincennes, going back to German-language church services in the mid-1800’s. 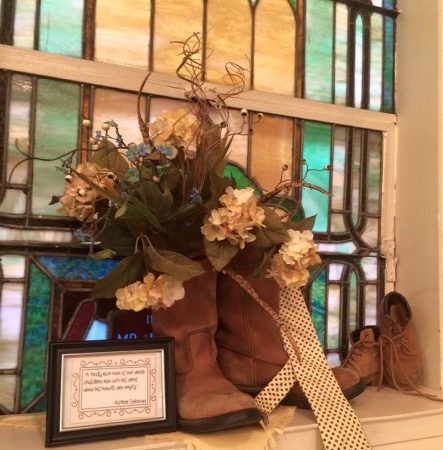 Click on each tab below to learn more about our history. 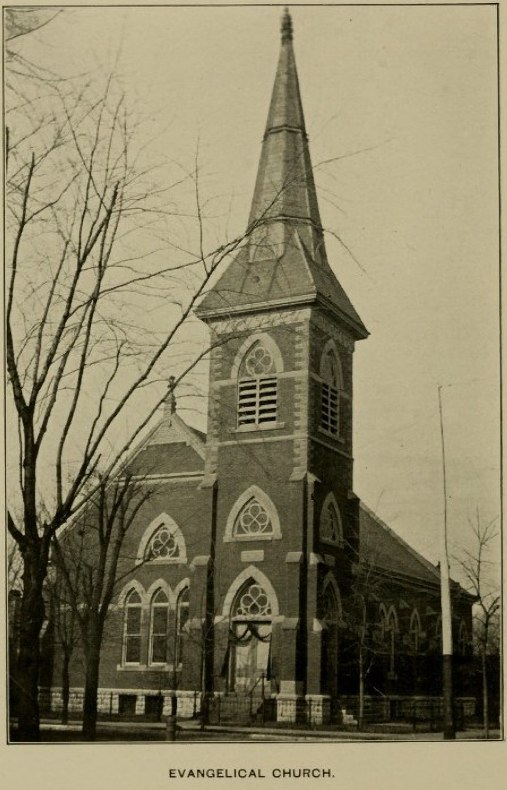 “St. John’s Evangelical Church was organized on the separation of St. John’s Evangelical Lutheran church in August 1849, by Rev. C. Hoffmeister. The leading members of the church at the time of organization were: John Hamm, Frederick, Peter and William Ritterskamp, Jacob Brenhaus, Louis Bonsil and August Kircher.

A frame building was erected in 1862, on the corner of Fifth and Hart Streets, at a cost of $1000, size 24 x 50 feet…occupied by the congregation until the erection (1886) of the splendid brick structure on the corner of Fifth and Shelby streets, which is an architectural ornament to the city. It has stood on this spot, seemingly favored by Providence, for upwards of sixty years.

This congregation has a large and commodious pastoral residence (frame building parsonage built in 1862 at a cost of $1200).

This congregation has also more recently erected a…fine parochial school building, and maintains schools for both boys and girls (Sunday and parochial).

This congregation is in a flourishing condition. The present membership (1902) is eighty-eight. This church has prospered under its several pastors, and is doing a good work in the interests of Christianity.

From: History of Old Vincennes and Knox County, Indiana (Greene, 1911)
“In August 1849, Rev. C. Tomson, a German theologian, crossed the waters with the avowed purpose of becoming a citizen of American and enjoying its freedom, and came to Vincennes.

A committee of Germans, composed of Messrs. Bieber, Hoffman and Watjen, called upon him to pay their respects, and request him to remain and conduct a service in the German language. This he readily consented to do, and conducted the first German Evangelical service ever heard in the city. 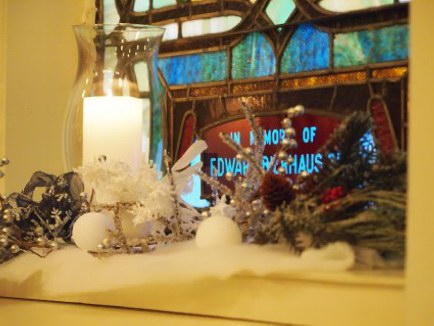 his willingness to locate in Vincennes, a second service was arranged for the second Sunday in September. At this service, final arrangements were made, and the organization perfected under the name of “German Evangelical Protestant Church of Vincennes,” and an invitation extended all German Protestants to become members.

The salary was the most serious consideration, as the members consisted of a few laboring men who were receiving only 35 or 40 cents a day. Nothing daunted, they circulated a subscription list and succeeded in securing $150 for the pastor for one year.

Rev. Tomson had consented to remain conditionally, with the privilege of bettering his condition if an opportunity presented itself. In April 1850, he was called to Louisville, KY and left Vincennes, after eight months; successful labor in the services of the church.

After a few years, the congregation desired to own its place of worship, and when Mr. Cochran, a resident of Cincinnati, OH, presented the congregation with two building lots on the corner of Eighth and Scott streets, it was decided to attempt to build a church. The treasury, however, was soon depleted, and work was compelled to cease.

Almost discouraged, the congregation resolved to appeal to the English churches for assistance. Accordingly a committee composed of William Busse, John Hamm, Henry Hauser and D. Watjen was appointed to solicit the help of the other churches. They responded promptly and arranged a supper for the benefit of the German church. This supper was so well organized and attended that the sum of $450 was realized. This enabled the Germans to complete their church.

Another difficulty presented itself at the dedication. They were left at this time to deplore the departure of Rev. Schlundt, who had been their pastor through many vicissitudes for several years. Ministers were very difficult at this time, and they were obliged to elect a Lutheran pastor, who naturally dedicated the church according to the ritual of the Lutheran church, with the inscription “German Lutheran Evangelical St. John’s Church” above the door. This occasioned a deplorable church war of several years’ duration, during which time the church suffered in every way — spiritually and financially.

Latterly, through an error, the congregation, while accepting the two lots from Mr. Cochran, had built the church on a third, for which Mr. Cochran demanded payment. Realizing, however, to what straits this faithful congregation had been reduced, he generously offered the lot at quite a moderate price.

The tension between pastor and congregation was so strained that the congregation was finally divided, and a separate church organization formed with the faithful Evangelicals. On the seventh of December, 1862, a second small frame church, which had been erected at the corner of Fifth and Hart, was dedicated with appropriate ceremonies.

To further enhance the beauty of the surroundings, a handsome Memorial Hall was erected by two members of the congregation, Mr. L.A. Meyer and Mr. Wm. H. Vollmer, in memory of their deceased sons, to be used for church purposes.

The church has had thirteen pastors. The Reverend Louis Hohmann is in charge at the present time [1911]. He has under his care a large, prosperous congregation, with all the church property free of debt.

Our story begins in Au 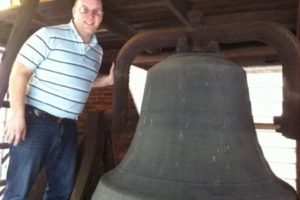 gust 1849 when some German Protestant residents in the community learned that the Rev. C. Tomson, a German theologian, was in town. They prevailed upon him to conduct the first worship service in Vincennes in their native tongue.

A second service started in September, and the German Evangelical Protestant Church of Vincennes was organized.

In 1853, the congregation adopted the first constitution and assumed the name of German Evangelical St. John’s Church.

In 1854, the building of a house of worship began when the congregation received a gift of two lots in Cochran Addition at Eighth and Scott Streets. Unfortunately, funds ran short and the new building was unfinished.

However, the English churches in the community came to the rescue: a fund-raising supper was held which collected $450. That sum was sufficient to complete the work, and the church was dedicated by Rev. Cornbaum in May 1856, according to the Lutheran Ritual. This started a period of strife which went unresolved until the Lutherans bought the Evangelicals’ share for $750. The Evangelicals bought property on Fifth Street between Hart and Shelby Streets. A little frame church was built at the corner of Fifth and Hart and dedicated on the second Sunday of Advent, 1863.

The first parsonage was built on the Fifth Street property, and it served the pastors’ families for about 35 years. It was later moved to 609 N. Fourth Street. During this same time the church operated a parochial school. At first the school met in the rooms at the rear of the church building. Later a separate schoolhouse was built on land purchased in July 1880.

The church now owned all of the frontage in the block between Hart and Shelby Streets on North Fifth St. Discussion began on the topic of expanding the present building or erecting a new building. Early in 1886, the decision was made to build a new church. The cornerstone of the new church was laid on June 25, 1886. A special train of six cars, loaded with people, came in from Evansville, Haubstadt and Princeton to cheer the building of the new church, which cost $9,000 when completed. A new pipe organ was also installed at a cost of $2,000. A new parsonage was constructed at the corner of Fifth and Hart a few years later.

At the annual meeting in January 1903, two families announced their gift of an educational building as a memorial to their sons. Memorial Hall was dedicated on April 10, 1904. In 1922, seeing the need for enlarging and modernizing the building, the two families made another generous gift.

In the next two decades, St. John’s experienced both a split and a merger. Dissension in the church surfaced in 1932 that was not able to be resolved. This resulted in a split at which time St. Paul’s Lutheran Church in Vincennes was organized. While the local church was growing in number of members and buildings, its ties to the wider church were also growing. The church was organized in the Evangelical Synod until 1934. At that time a union was perfected between the Evangelical Synod of North America and the Reformed Church in the United States, and the church became St. John’s Evangelical and Reformed Church.

The Zion Evangelical Church of Johnson Township closed its doors, and members joined the St. John’s congregation in 1941. Rev. Carl Scherzer received new members, and the Church Board of St. John’s assumed responsibility for the perpetual care of Zion Cemetery.

In 1957, Evangelical and Reformed Church and the Congregational Christian Church denominations joined and became the United Church of Christ denomination. Also in 1957, a building project was undertaken that connected the church with Memorial Hall.

Two years later, the old parsonage was razed and a more modern one built. In 1958, the Rev. Dave Lennington and his wife were commissioned as missionaries to Africa by the St. John’s congregation. After their tour was over, the congregation began assisting Dr. Joyce Baker with her work in Honduras.

1998 saw the donation of a member’s home to be used as the new parsonage, allowing for the old parsonage to be renovated into much needed office space and classrooms. In late 1998, another building project took place, adding an additional room that would connect Memorial Hall with the parsonage. It was finished in early 1999 and dedicated “The Sonshine Room.”

In 1999, St. John’s United Church of Christ celebrated its sesquicentennial anniversary with a 6 month community-wide celebration honoring the church’s continued commitment to mission giving and involvement in benevolent causes throughout the community.

A new senior pastor, Dr. Rev. Kate Lambertson arrived in 2005. Rev. George Varns, our beloved Associate Pastor, retired and now enjoys the title of Pastor Emeritus. However, he and Ruth are still quite active in the church.

We have always been known in the community for being a leader in social outreach, including the first KIDS HOPE program, the first Backpacks for Kids (weekend food) program, our B.A.B.E program, our Phoebe’s Mission program, and our new Sandy’s Pantry for VU students. A partnership with First Christian Church to supply school supplies to local children grew into the city-wide K.E.T.A. program. We are involved in many other organizations and funds.

Our Youth and adults have gone on work trips to Louisiana, the Appalachians, the Smokies, and Chicago, among others. Our church responds to current needs and changes with the times, as we believe Jesus asked us to do, embracing new challenges and filling new social needs even as we continue to enjoy our traditions, classic hymns, and a history that is deeply woven into our local community.

In January 2016, St. John’s UCC entered a new chapter as Dr. Rev. Kate Lambertson left us after a fruitful ten years. As our Pastor Search Committee looked for a new Pastor, we benefited from the knowledge and leadership of Rev. Dr. Lynn Marino, who had been formerly with us for 13 years, and Rev. Dr. George Ford. Our new Pastor, Rev. Steve Boorsma, has been with us since March 2018.

This was written when it was almost time for the cornerstone to be laid for the new church building that still serves as our Sanctuary. It goes into much more detail than the local history books, and it also explains more clearly the issues surrounding the splits and founding of St. John’s Lutheran Church and St. Paul’s Lutheran Church. 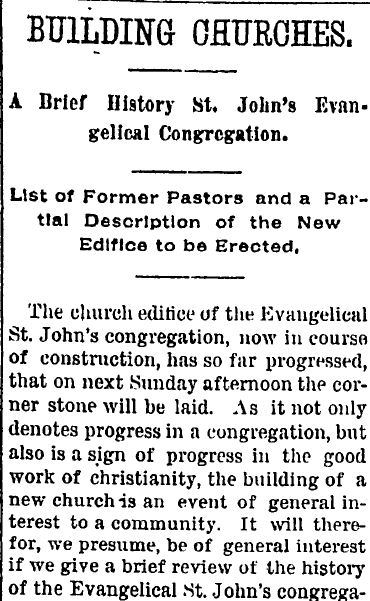 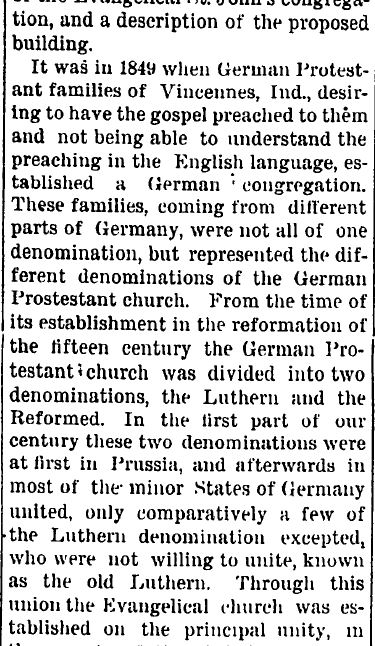 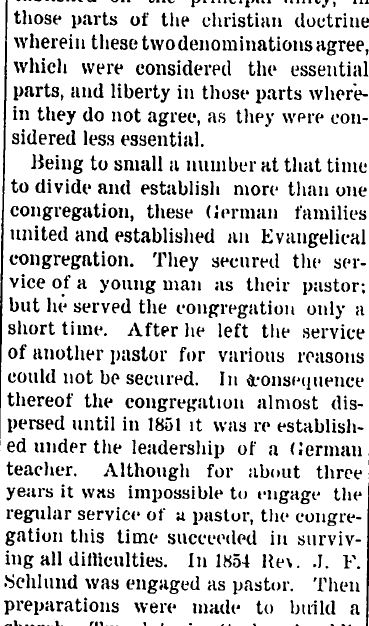 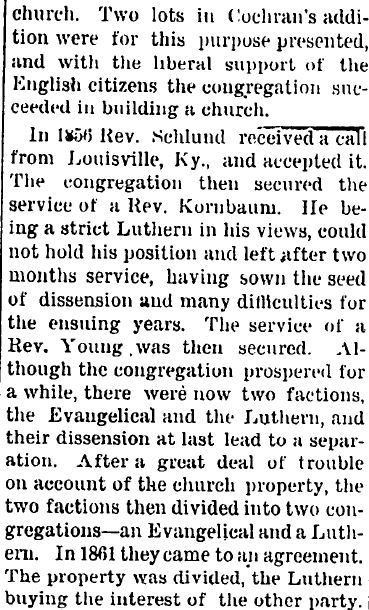 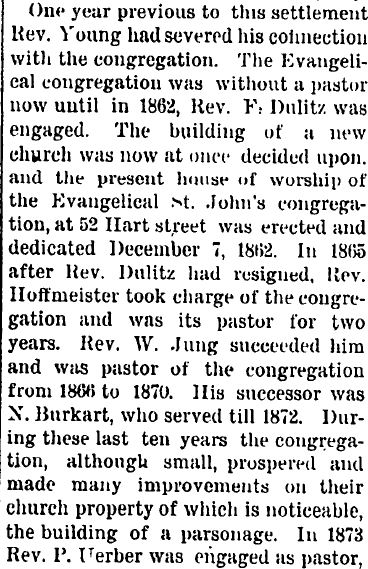 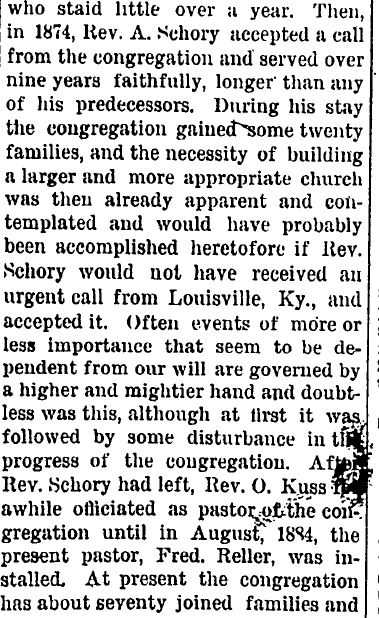 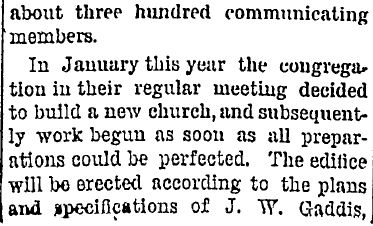 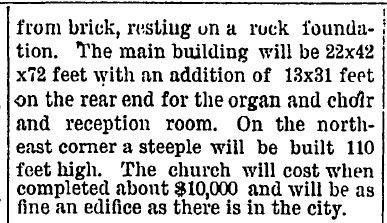